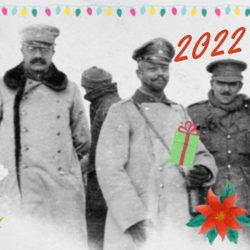 For another year in a row, the Je me souviens team offers you a selection of books, movies and TV shows to discover during these few days of respite! When you’re not cooking dinner for the family, enjoying the outdoors or trying to ignore your emails, why not take the time to read a little?

Are you interested in more general books on Indigenous history? If so, we have some other books to recommend! The Indigenous Peoples Atlas of Canada is a large collaborative project that presents maps, photographs and detailed information about Indigenous cultures within Canada in four volumes. All four books are available in English and French online for free! For more reading on the subject, we also recommend the following books, in french: Les Iroquoiens du St-Laurent, peuple du maïs (Roland Tremblay), Deux siècles d’esclavage au Québec (Marcel Trudel & Micheline D’Allaire) and Femmes de personne sexes, genres et pouvoirs en iroquoisie (Roland Viau).

As part of their Westmount and the War exhibition, our partner the Royal Montreal Regiment Museum has released an interactive map of the city of Westmount in relation to the Second World War. This is a great way to illustrate how the war was more central to the daily lives of Montrealers than we thought!

Do you like video games? The holiday season is often accompanied by discounts. So why not take advantage of it to discover new games? We personally recommend two computer games that might interest you. The first one, This War of Mine, puts you in the role of a group of civilians caught in the middle of a civil war. You have to make your group survive by accumulating resources, improving your shelter and dealing with various unforeseen events such as the weather, groups of brigands and the war itself! This War of Mine has been critically acclaimed for its realistic portrayal of war on the civilian side. A bit more playful, our second suggestion is the puzzle game Valiant Hearts: The Great War from Ubisoft Montpellier. Depicted with beautiful artwork, Valiant Hearts features several characters: the French soldier Emile, his German stepson Karl, the Belgian nurse Anna, the American engineer Freddie and the dog Walt. In different scenarios, each character must overcome different riddles and puzzles to progress further. The game is also accompanied by several computer segments about the war and allows us to learn as much as to have fun!

That’s it for this new selection of recommendations! In case you missed them, we suggest you take a look at our previous editions, so you can get more inspiration! So here is our 2020 list and our 2021 list, right under these links.

Happy reading from the Je me souviens team!