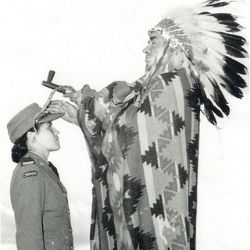 This photo of Mary Greyeyes has travelled the world. It’s a beautiful photograph that’s meant to be a proud moment for Canadians. We see an Indigenous woman in uniform, kneeling before a man in regalia, in a prairie field of long grass. It feels like a special moment, a private moment that we’ve been made privy to; a young woman is receiving the blessing of her community before going off to war. This photo hangs in the Canadian War Museum and for a very long time it bore the caption “Unidentified Indian Princess getting blessing from her chief and father to go fight in the war.”

Of course, that’s all a lie.

Mary Greyeyes (Reid is her married name) was not a princess, but she was remarkable. Born on November 14, 1920, she grew up in Maskêko-Sâkahikanihk (Muskeg Lake Cree Nation), north of Saskatoon.  At age five she left home to attend St. Michael’s Residential School at Duck Lake, about 100 km from her home. There she would have learned “cooking, laundry work, needlework, general housewifery and dairy work” as well as religion (Catholic) and English.[1] Her education ended after Grade 8, but she continued to take lessons from a nun at night while cooking and cleaning for the school by day. Despite the fact that students were only allowed to return home for one month out of every year, Mary seemed to maintain close ties to her family.

When Canada declared war on Germany, Mary’s favourite brother, David Greyeyes-Steele, enlisted in the army to support the family. Once the army began to recruit women, Mary decided to follow in his footsteps and travelled to Regina in 1942 to enlist. The Navy and the Air Force had each opened women’s divisions, but they were both only open to those “of white race.” The Canadian Women’s Army Corps (CWAC), on the other hand, accepted all women, so that is where she went.  New recruits were required, however, to past a written test in order to be accepted. Mary was nervous that she wouldn’t pass because of her limited education. According to her daughter-in-law, Melanie Reid, Mary watched as the four women who took the test before her, all of whom were white and had more years of education than she did, were rejected. But when Mary took the test, she passed. She thus became the first Indigenous woman in the CWAC.

Shortly after enlisting, Mary was approached by a public relations officer and asked if she would participate in a photoshoot. New recruits were frequently photographed and published in newspaper articles to encourage more women to join the army. Mary wasn’t just photographed, however. She was driven out to the Piapot Reserve, which, it should be noted, she had never been to before, and was made to pose with a man named Harry Ball, whom she’d never met before. Harry Ball wasn’t actually a chief (though he later became one), but he was a veteran and was available. Harry and the Mounties that had brought Mary out to the reserve cobbled together the regalia he was wearing in the photo, taking a blanket from one house, a pipe from another and so on.

It was late June in Saskatchewan and it was hot. Mary was asked to kneel in the grass with the bugs while Harry stood over her. The photographer took photo after photo and they complained of the heat to one another in Cree. Mary learned that Harry was paid $20 for the photo; she only got a good lunch and a new uniform. And that’s the “blessing” we see: two strangers enacting a white photographer’s idea of ceremony while making small talk in a hot field.

The photo was first published locally, in Winnipeg and Regina, but it was soon picked up by newspapers overseas and appeared in numerous publications in Great Britain. The popularity of the photo may have been a part of the Canadian attempt to carve out a unique identity, independent of the British, by documenting the war effort through numerous media. Mary was a visual symbol of how the Canadian war effort involved all Canadians – men and women, English, French and Indigenous alike. It didn’t end with the photo either: Mary was frequently sent to public events to represent the CWAC and, once in England, was even brought to meet the King and Queen.

Though the CWAC was part of the Canadian Army, women were not actually trained for combat. They were instead trained in and assigned to various tasks that would support the war effort. Mary was first sent to Aldershot, England where she worked as a laundress at the military base. She quickly realized that she hated her job there and requested a transfer to another service. Her supervisor tried to sabotage the transfer, writing “Does not speak English” on her papers.

The transfer went through despite this lie and Mary went to cook at the Canadian Military Headquarters in London. She enjoyed her position there and even called this time some of the best years of her life. She was well known because of her photograph and was ordered to numerous events where she was known as “the Indian.” She received love letters from strangers, met royals and was photographed with public figures. She remained in London and continued working until she was discharged in 1946.

After discharge she returned to Muskeg Lake to visit family and then met her future husband, Alexander Reid, in Winnipeg. They had two children together and settled in British Columbia. She worked as a cook in Victoria and an industrial seamstress in Vancouver.

There was, according to her daughter-in-law, another photoshoot some years after the first. While she was visiting family in Muskeg Lake, a photographer showed up with some Mounties and asked to photograph her at a polling station. Because Mary had been in the CWAC, she was one of the few Indigenous women who had the right to vote at that time.

According to Mary Greyeyes’ stepdaughter, Mary refused to be photographed this time, asking “Can my mom vote? What about my cousins over there, can they vote?” When they answered that they hadn’t been in the war, she said: “All those years I said nothing. Now I’m saying no.”

This sentence, if accurate, is quite revealing. Mary Greyeyes Reid knew she had been used as a symbol of unique Canadian diversity coming together to fight the war, but she also knew that she lived in a country that still treated her and her family as non-citizens.

The story told by that famous image is a lie, but the story behind it is far more interesting.

Article written by Marina Smyth for Je Me Souviens.