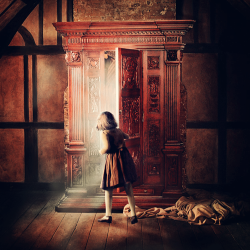 As war raged in Europe, Britain was battered by air raids during the German Blitz in 1940. Families from London took refuge in the countryside, and children often had to make the journey alone. In The Lion, the Witch and the Wardrobe, this is the pretext for the journey of the four Pevensie children to Professor Digory Kirke‘s house, where they discover Narnia and the treasures, misfortunes and magic of this hidden world.

The Chronicles of Narnia

The Chronicles of Narnia were published between 1950 and 1956 as the world was slowly recovering from the great armed conflict of the Second World War. This series of children’s fantasy books has been enjoyed by young and old for generations.

Many historical and literary analyses can be drawn from this series and from its theatrical, film or TV adaptations. Did the Second World War inspire these works by C.S. Lewis? Or was it the First World War? Or did Lewis’s Christian faith inspire the narrative?

Born in 1898 in Belfast, Ireland, Clive Staples Lewis was one of the greatest British authors of the 20th century. With over thirty published books to his name, he is mainly known for the theological work Mere Christianity (1952), the science fiction novel Out of the Silent Planet (1938) and the Chronicles of Narnia series. He entered Malvern College (England) in 1911. During these years, he discovered his love for literature, fantasy and mythologies. In 1914, he continued his studies as a private student under the tutelage of W.T. Kirkpatrick, who helped him discover classical literature, and he received a scholarship to Oxford in 1916.

Lewis enlisted in the British Army in 1917 and saw combat with the infantry during the First World War. In 1918, he was wounded, and one of his close friends (Paddy Moore) died in battle. After his discharge, Lewis moved in with Moore’s mother and sister. In 1925, he took a position at Magdalen College and joined the Inklings literary club in 1926, where he met J.R.R. Tolkien (author of The Lord of the Rings). In the early 1930s, he abandoned atheism, opened himself up again to the idea of a God, and converted to Christianity in 1931. He published a number of books in the pre-war years, and during the war gave a series of talks about Christianity on the radio (what would be a podcast today) that were later published as a book (Mere Christianity, 1952).

During the Second World War (1940-1945), Lewis stayed at his home in the countryside and even took in many evacuee children. In terms of his literary output, these years were prolific for him. He began writing the Chronicles of Narnia around the end of the 1940s and published The Lion, the Witch, and the Wardrobe in 1950, finishing all seven volumes within six years. He produced many other works until his death in 1963 at the age of 64.

A recurrent theme in the literary analyses of the Chronicles of Narnia is that of Christianity. However, the Christian ideals depicted in the chronicles (courage, faith, adversity, loyalty, etc.) are not specific to Christians but rather to many peoples and nations. Lewis began conceptualizing the Chronicles of Narnia during the Second World War and published them within a decade of that dramatic event. In the post-war period, people needed to think about the concepts of good, faith, and the triumph over evil as they were recovering from tremendous recent atrocities. The entire planet had experienced trauma, which clearly informed the needs of this new generation.

After the Pevensie children flee the great evil of their time and world, they find themselves in the middle of yet another struggle between good and evil. The four children represent innocence and the fight of a small group against a larger threat. Thanks to their courage, faith and perseverance, they vanquish the White Witch, who personifies evil. The Chronicles of Narnia is the tale of a small group who fight an evil force much greater than themselves and succeed even when all hope seems lost. A parallel can be drawn with the historical context in which C.S. Lewis wrote these stories, which may explain their popularity.

At the time, children’s literature generally avoided fantastical ideas or even scenes of violence. Despite criticism of these works, the Chronicles of Narnia quickly became 20th-century literary classics. Why is that? As the Second World War ended, people needed to deal with the trauma of the recent past, particularly in a story of triumph over evil in which innocence prevails. Fairy tales have been used in psychology to help people, and especially children, deal with trauma (N. Norris, 2012), and literature is often seen as a way to escape the struggles or major traumas of everyday life. Imaginary worlds let people gain perspective on their hardships through fictional conflicts and obstacles.

As argued by Norris (2012), The Lion, the Witch, and the Wardrobe creates a liminal (in-between) space where trauma and anxiety can be articulated, ordered—and therefore worked through—according to a different narrative. Indeed, the Chronicles deal with the major themes of trauma, loss and betrayal on many levels. First, the Pevensie children are betrayed by their country and their own family by being sent away. (Although the propaganda at the time spoke of sending children away to keep them safe, the intentions were quite different. Mothers could enter the labour force when they did not have to look after their children. Not evacuating one’s children was seen as a betrayal, and many families suffered as a result.) The protagonists then cope with not only the loss of their family but also the betrayal of having to travel far from home. Once in Narnia, they experience many more betrayals and losses, such as Edmund’s alliance with the White Witch, the loss of the Beaver family’s home, and Aslan’s sacrifice. Despite their sad fate and many struggles, the Pevensie children emerge stronger and ready to fight a great evil. The tale therefore gives readers faith in both themselves and a power greater than themselves. A hypothesis for the success of the Chronicles is the post-war generation’s need to deal with the great traumas of war, such as loss, betrayal, and the need to completely rebuild.

What inspired the Chronicles of Narnia?

Many events, people, and concepts influenced and inspired Lewis as he wrote these books. Here are just a few.

Lewis served with the British Army in the First World War. His time in the trenches inspired the military aspects of his work.

When he was a teenager, he had images in his mind of a faun with an umbrella under the snow or of a queen in a sleigh. Aslan the Lion came to him in a dream when he had already started the first volume, and this idea linked the rest of the story and the six books that followed. Narnia came from the simple idea of a stranded lamp post in a snowy forest. Lewis used this image as a basis to create this entire fictional world.

As an adult, Lewis became a professor at Oxford, then Cambridge. During his years there, he met the other members of the Inklings literary club, which included J.R.R. Tolkien. Tolkien and Lewis influenced each other in the development of the fantasy genre. His dear friend inspired Lewis to leave his religious influences in his writings, although Tolkien criticized the highly allegorical aspect of the Chronicles of Narnia.

During the Second World War, Lewis took in many children who were escaping the air raids in London. Four of these children inspired Lewis to create the four Pevensie children, although the character of Lucy was inspired directly by his niece Lucy. He even dedicated the first volume to his niece in the hope that she would enjoy the tale.

A proud defender of the Christian faith, Lewis drew from various facets of the Bible and other holy texts to create his story. One of the greatest parallels is between Aslan and the Christian God. Aslan takes on different roles in each volume, as he embodies an all-powerful God in one book (The Magician’s Nephew), a guiding and self-sacrificing Jesus in another (The Lion, the Witch and the Wardrobe), and the Holy Spirit in others. Lewis drew from other stories in the Bible, such as Genesis and David and Goliath.

This information was confirmed by Lewis himself or by the Oxford University C.S. Lewis Society.

The Second World War’s role as inspiration for the Chronicles of Narnia has not been confirmed, aside from a mention at the beginning of the first volume, The Lion, the Witch, and the Wardrobe. Lewis did not really speak of the war, and few analyses of the text allude to it; those that do are generally 21st-century interpretations. The Second World War is briefly brought up in the introduction to explain why the four Pevensie children end up at Professor Kirke’s house, but that is the only time it is mentioned.

Official fan blogs for the books and movies often link the Second World War to the Chronicles due to additional details in the 2005 and 2008 movies. For example, the beginning of the first film (2005) shows detailed air raids on London. This scene presents the theme of loss, especially when Edmund risks his life, and the lives of others, to retrieve a photo of their father who has gone off to war. Was this addition a purely cinematic choice? Or was it because the imagination of subsequent generations was particularly impacted by the Second World War? After experiencing combat, Lewis may not have wanted to focus too much on the war. Later generations, however, may have placed the Chronicles in their historical context and given this event much more weight compared to the author’s original intent.