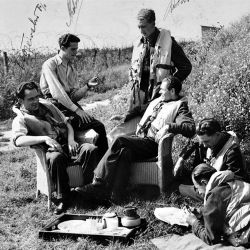 Operation Jubilee, which took place at the Dieppe beaches on August 19, 1942, was a large-scale military operation carried out by many outfits from the Canadian and British armies. The Allied forces were joined by about 50 American rangers and 15 soldiers from liberated France. However, the substantial participation of the exiled Polish army is often overlooked.

This fighting force mainly included highly experienced veterans from the war against Germany in 1939 and the Battle of Britain in 1940. They showed valour on two fronts during the Dieppe raid, as they served in the air and on the sea.

The 74 squadrons that made up the Allied air force at Dieppe included five Polish squadrons: the 302, 303, 306, 308 and 317. Their goal was to keep the German Luftwaffe occupied and support the land operation with covering fire. The Polish squadrons of all fighter planes directly attacked the German bombers—mainly the Junkers Ju 88 and Dornier Do 217 aircraft—that were battering the British Navy.

The Polish squadrons carried out a total of 4 sorties during the raid. Suffering very few losses, the Polish pilots showed great prowess while engaging extensively with the Focke-Wulf Fw 190s (the German fighters) and through a number of many close-range dog fights. The 303 Squadron, for example, recorded shooting down over fifteen German aircraft and lost only one pilot.

Despite the Polish air force doing their part, the air battle at Dieppe—the biggest of the war—did not have the hoped-for impact on the Luftwaffe, which quickly recovered its losses. However, the Allied losses were much smaller than the generals had estimated and showed that the Allied air force could win at attrition warfare against the Germans.

The Hunt-class ORP Ślązak destroyer was the only ship representing the Polish Navy at the Dieppe raid. It was included in the British Navy’s Group 5 and accompanied the No. 3 Commando, whose mission was to land at Berneval to the east of Dieppe. While making their way to the beaches at night, the group of ships happened upon a German convoy, which ruined the element of surprise for the assault troops in the east. The Polish sailors, however, were not informed of what was going on as the rest of the group skirmished with the German convoy. As it was the middle of the night, they couldn’t determine the direction of the shots, and the Ślązak’s officers assumed that they were coming from the beach.

Commanded by Captain Romuald Nalecz-Tyminski, the Ślązak was able to approach the beach and initially protect the landing ships. However, as the raid unfolded, it was clear that the Allies would have to withdraw. Under heavy fire from the German defenders, Captain Nalecz-Tyminski ordered his destroyer to head toward the beach to pick up as many soldiers as possible. In direct defiance of orders not to sail the destroyer too close to German fire, the Polish captain felt it was more important to save the men on the beach. As a result, over 85 Canadian soldiers were able to board the ship and return to Britain.

Although the Polish military forces at Dieppe were small in number, they made a great contribution to the war effort. Despite Poland’s brutal occupation by the German army at the start of the war, many outfits from the Polish army continued to fight with the Allies. The Dieppe raid was just one of many battles for these soldiers.