What was 9/11? How did it change the world forever? 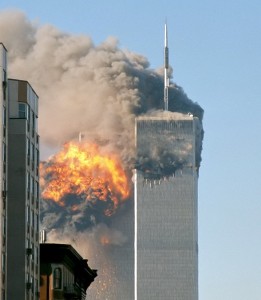 A) September 11, 2001: Four airplanes (American Airlines and United Airlines) were hijacked mid-air over the eastern United States by 19 Islamic militants from the terrorist group Al Qaeda. They violently crashed two planes into the twin towers of the World Trade Center in New York City. One airplane crashed deliberately into the Pentagon, headquarters of the United States Department of Defense. The fourth plane crashed into a field in Pennsylvania after those on board intercepted the terrorists’ plan.

2977 people died, including 24 Canadians, and over 6000 people were injured. The dead ranged in age from 2 to 85 and included hundreds of first responders: police officers, firefighters and paramedics. It took over three months to extinguish the flames at the site where the Twin Towers stood in New York City. Many died of cancer-related causes and respiratory disease afterwards. It was the largest act of terror on North American soil.

Osama bin Laden, head of Al Qaeda (a violent Sunni Islamist organization founded by Osama bin Laden and other Arab supporters in 1988 during the Soviet invasion of Afghanistan) later claimed responsibility for the attacks. Prior to the attacks, Osama bin Laden and other jihadists (individuals who claim extremist Islamic goals through their radical interpretation of the Quran) issued fatwas (binding opinions on Islamic (sharia) law) in the name of the World Islamic Front for Jihad against Jews and Crusaders. They declared that it was the duty of every Muslim to kill Americans and their allies, military and civilian, in the name of liberating the al-Aqsa Mosque in Jerusalem (the third holiest site in Islam), protecting the holy mosque in Mecca and inciting their enemies’ armies to leave Islamic lands so that faith in Allah would prevail. 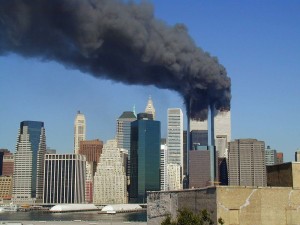 B) The 9/11 terrorist attacks triggered the United States and its allies, a coalition of over 40 countries, to declare war on the Al-Qaeda terrorist network, which was responsible for the attacks, and on their Taliban allies, who had harboured Al-Qaeda and provided them with training facilities in Afghanistan. The Taliban is a Sunni Islamic fundamentalist movement who, in 2001, ruled over three quarters of the Afghan territory. The Taliban regime had been condemned worldwide for their cruel and punishing treatment of Afghanis, in particular women and ethnic minorities.

NATO (North Atlantic Treaty Organization) used article 5 for the first time since its creation in 1949, which allows member countries to act in self-defence if they are attacked. They declared war on Al-Qaeda and the Taliban. Operation Enduring Freedom began on October 7, 2001 and after two months both Al-Qaeda and the Taliban were pushed out of Afghanistan. Thousands of Islamist militants were killed or captured. Others went into hiding. US forces killed Osama bin Laden, the founder and leader of Al-Qaeda, on May 2, 2011 in Abbottabad, Pakistan.

C) The North Atlantic Treaty Organization was founded on April 4, 1949 at the signing of the North Atlantic Treaty by 12 nations. Initially formed due to fear of a Soviet attack on western Europe, today it is a military alliance of 29 countries from North America and Europe with the goal of protecting each other through military intervention if one of its member states is attacked. NATO promotes diplomacy and peaceful resolutions to disputes first, however. If this fails, NATO has the capacity to deploy military operations alone or with cooperating nations and international organizations.

The organization promotes the ideals of democracy, individual liberty and the rule of law. There are three main objectives of the NATO alliance: collective defense, crisis management and cooperative security. All of the member countries have militaries except for Iceland. Three member states have nuclear weapons: United States, United Kingdom and France.

The Canadian Armed Forces have played a critical role in every NATO mission around the world since its inception in 1949. Canadian military were stationed in Europe during the entire length of the Cold War (1947-1991) primarily in France and Germany. Canada played an important role in the NATO force during the Korean War (1950-1953). In 1957, Canada and the United States joined forces and created NORAD, the North American Aerospace Defense Command in response to the Soviet Union’s space program and satellite launch. 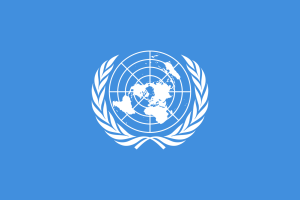 NATO supports its member countries through initiatives like the NATO Science for Peace and Security Program, which promotes technological and scientific innovation among member countries and its citizens, including supporting Nobel laureates.

The United Nations (UN) Security Council passed resolutions 1368 and 1373 in 2001 to support international efforts to eliminate terrorism. Canada participated in the Afghanistan War as part of the NATO coalition from 2001-2014 with the goal of destroying the Al Qaeda terrorist network, responsible for the deadly 9/11 terrorist attacks in the United States and ousting the Taliban Islamic militant regime in Afghanistan. Over 40,000 military personnel served in Afghanistan, on land, sea and air, the largest Canadian military deployment since WWII. The Canadian military also played an important role in the reconstruction of Afghanistan after the Taliban defeat, by training local security forces to defend themselves from future terrorist activities and infiltrations. Sixty members of the Royal Montreal Regiment and approximately 3100 members from the Royal 22nd Regiment volunteered. 158 Canadian military personnel died, 2000 were injured and many continue to suffer from PTSD (Post Traumatic Stress Disorder).

As of 2019, NATO operates in Afghanistan, Kosovo, the Mediterranean, Iraq, Africa and Europe. 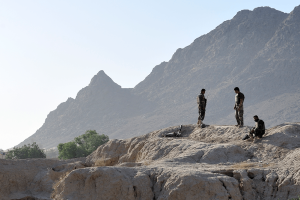 What happened in Afghanistan’s history that led to war?

Afghanistan became a country in 1747, although civilizations have inhabited the territory since 3000 B.C.E. In more recent times, empires have fought over the strategically located mountainous area between Asia and Europe, about the size of Saskatchewan, populated by 30 million people today.  Prior to the Arab invasions and the spread of Islam, Zoroastrians, Macedonians, Buddhists and Hindus lived there. Today their descendants make up the diverse groups of people all living in Afghanistan: the Pashtuns, Tajiks, Hazaras, Turkmen, Aimak and Baloch, among others.

In the 19th century, the British and Russian empires wrestled to expand their territories and fought over Afghanistan, nicknaming it the “Great Game”. During the 20th century, Afghanistan experienced political instability and in-fighting until the violent military coup of 1978. The Soviet Union became an economic partner with Afghanistan, helping to build roads, hospitals and schools and to train the Afghan army. At this time, the Afghan government violently punished and murdered those who opposed them.

In 1979 the people, united by Islam and their opposition to liberal policies and Soviet dependence, revolted against the government.  100,000 Soviet troops invaded Afghanistan on December 24, 1979 and the United States responded by giving money and arms to the Mujahideen, Islamic guerrilla fighters, to fight the Soviet Union’s invasion. This was during the Cold War, and the United States did not want the Soviet Union to control this strategically-located territory. Over half a million people were killed by Soviet fighters and over 4 million Afghan refugees fled to Iran and Pakistan.

The Soviet Union withdrew from Afghanistan in 1989. After years of fighting and instability, Afghanistan fell into a civil war as various warlords who had fought together against the Soviets fought one another for control. People suffered further from droughts and famine. The newly-formed Taliban, an Islamic militant group, stepped into this power-vacuum in 1994, and by 1996 they controlled the majority of the Afghan territory and had established a harsh form of Islamic law.

F) Al Qaeda and the Taliban

During the Soviet-Afghan war, which lasted from 1979 to 1989 and which saw Islamic warriors, the Mujahideen, fighting against the Soviet invaders, a number of foreign Muslim fighters came to fight alongside the Afghans. Amongst them was Osama bin Laden, a rich Saudi Arabian. Osama bin Laden believed in strict Islamic law and was against any foreign influence in Muslim affairs. After fighting alongside and helping finance the Mujahideen, bin Laden and 15 other Islamic extremists formed Al Qaeda in 1988 to fight a holy war (jihad) against foreign powers trying to occupy or influence the Muslim world. Al Qaeda was mostly comprised of Arab, non-Afghan fighters who came to train in Afghanistan and Pakistan.

When the war was over and the Soviets left, the country descended into civil war as several victorious warlords fought for territory and power. It was a time of lawlessness, crime and atrocities, with all sides targeting civilians. In 1994, the Taliban, an Islamic militant group, stepped into the mix. They promised stability and an end to lawlessness and quickly grew in strength. Funded by Pakistan and by bin Laden, they gained control of most of the country by 1996 and established the Islamic Emirate of Afghanistan. The Taliban revealed itself to be an oppressive and violent regime. Public executions and punishments became common. Massacres were committed against non-Sunni Muslims. The education of women and girls was illegal and women had to cover their entire bodies, including their faces, with a burka. Most of the country lived without electricity or paved roads. The Taliban also broke ties with foreign aid organizations and civilians suffered from famine, poverty and lack of access to medical care.

Al Qaeda and the Taliban were allies and Al Qaeda established camps in Afghanistan where they trained thousands of followers. Al Qaeda bombed two American embassies in Africa in 1998. Osama bin Laden became the world’s most wanted terrorist. The United Nations imposed economic sanctions on Afghanistan for harboring terrorists, yet the Taliban refused to hand over bin Laden. Al Qaeda claimed responsibility for the 9/11 attacks in 2001.

←Reflections on War in Afghanistan