The Cost of Victory

Canadian troops quickly earned a reputation for being strong, brave – and effective. Soon, they were used by the Allies as “shock troops”, which meant that they were sent to where the battle had stagnated in order to offer reinforcement and hopefully break through the enemy lines.

While it is easy to find out how many soldiers were physically hurt by the war, it is much harder to find what psychological impact the war had on soldiers. Some 9,000 Canadian soldiers were reported as suffering from “shell shock”, which we refer to today as post-traumatic stress disorder (PTSD).

Despite the victory and despite the war being over, many continued to suffer from illness and psychological scars. The path to reconciliation spanned generations. We must still ask ourselves today, what have we learned from the First World War? Was the sacrifice of human lives necessary to move Canada forward on the world stage and to make Canada the country it is today? Was it worth it? 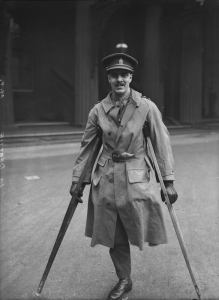 Known as the “broken gargoyles,” many men came back from the front wearing the consequences of the war on their faces and bodies. Disfigurement and broken limbs were an important post-war issue since 172,000 Canadian soldiers had been reported wounded during the war (approximately 40% of all those who served overseas). These injuries led to serious problems when trying to reintegrate society: difficulty finding jobs, social isolation, loss of identity and pride, difficulty finding a life partner, alcoholism, and even suicide.

However, in an attempt to help veterans with social reintegration and to provide a better life to the wounded, the years following World War I saw rapid progress in the development of modern plastic surgery and prosthetics.

Seeing the disastrous effects of shrapnel on soldiers’ faces, Sir Harold Gilles, an officer of the Red Cross from New Zealand, became the driving force of innovation in reconstructive surgery in the Commonwealth. He treated patients and experimented with new methods at Queen Mary’s Hospital in Sicup, near London, England, a hospital that specialized in facial wounds.

In some cases, men with facial injuries were provided with prosthetic attachments that were held to their faces by straps or incorporated in eyeglasses. These would fully cover their wounds and were sometimes based on pre-war portraits of the soldiers. The masks were made from copper or tin, and were painted to match the patient’s skin colour.

Prosthetic arms greatly improved because of the high demand from wounded veterans returning home with missing arms. Usually made of wood, leather, rawhide or metal, these arms were considered functional. Most models had interchangeable parts and moveable joints that the user could modify depending on the usage requirements. For example, the user could change out a wooden hand that resembled a natural arm for a hook that would facilitate his tasks in a work environment.

The prosthetic legs made after World War I were more efficient than earlier models, but also lighter. Manufacturers replaced traditional materials such as wood and steel in favour of aluminum. They also added padding to make the devices more comfortable. To serve the high number of war amputees, the production of prosthetics shifted from an individual custom-made scale to an industrial scale.

The constant firing of rifles & machine guns, coupled with the explosions of artillery, grenades, and mortars made the trenches a particularly loud environment. During an artillery bombardment the noise on the battlefield could easily reach 140 dB for extended periods. Various degrees of hearing damage were recorded within the ranks of the Canadian Expeditionary Force but the artillerymen suffered the most, firing large guns repeatedly for hours each day, every day.

Men returning to civilian life were also prone to illness due to their long exposure to the harsh and unsanitary conditions of the trenches. Many suffered from chronic pains, tuberculosis, pulmonary problems, and in some had contracted a venereal disease.

A Regiment’s most sacred distinguishing honour

The Regimental Colours are embroidered and carefully woven by skilled craftsmen and can only be approved by the reigning Monarch. The Royal Montreal Regiment received their first set of colours in January 1919 at Unter Eschbach, Germany. This was the first time that a Regiment had been presented with Colours on foreign conquered soil at the end of a victorious campaign.

The Memorial Plaque was issued during WW1 and was given to the next of kin of all servicemen and servicewomen of the British Empire who died during the Great War. Over 1,355,000 bronze memorial plaques were issued throughout the British Empire. It was popularly known as the “Dead Man’s Penny” because of it’s shape and colour. Each memorial plaque was personalized with the name of the individual killed, along with the inscription “He died for freedom and honour.” (For women, of course, the memorial plaques were modified to read “She died for freedom and honour.”)

Each element in the design by Edward Carter Preston carries its own significance.

Can you complete the following sentences with the information you just learned?

←From the End of the War to Versailles

Coming Home and Reintegrating the Society→