After 1970 : The Impacts of the October Crisis

With the exception of natural disaster relief, it is relatively rare for Canadian military personnel to intervene on their own soil. So how did these soldiers feel about their deployment? How do they see the events 50 years later?

The October Crisis had many impacts on Quebec society. Labour strikes swelled in the years following 1970, such as the major La Presse lockout in 1971, and Quebec unionism remained very strong in the decades to come. The many institutions created during the Quiet Revolution gave Francophones access to better education and public service jobs in French, which reduced the wealth gap between Anglophones and Francophones.

Although the FLQ alienated some people after the death of Pierre Laporte, the sovereigntist movement took off in subsequent years. Many Canadians later saw the invocation of the War Measures Act as an attack on civil liberties, and saw the targeting of citizens for their political opinions as an infringement on their freedom of expression and as a tool of repression. The Parti Québécois came to power in 1976, and a first referendum on sovereignty-association was held in 1980. Lévesque had to declare defeat, but his reign saw French become the province’s only official language through the adoption of Bill 101. The following year, during the “Night of the Long Knives,” Trudeau repatriated the Canadian constitution without Quebec’s consent. Quebec has still not ratified the constitution, which enshrines Canada’s Charter of Rights and Freedoms. Trudeau’s multicultural policies led to a second referendum in 1995.

While today we often talk about the October Crisis and the FLQ as a struggle between Anglophones and Francophones, it is important to remember the Marxist roots of the movement as well as the global context of decolonization and workers’ rights. The opposition between two founding communities left out Indigenous peoples and the many immigrants who had contributed to the province’s development.

Over the years, as the separatist movement gained enough popularity to inspire two referendums and to terrify English Canada with the prospect of separation, the October Crisis has taken on different meanings and inspired different interpretations according to the political affiliation of the source. Sources close to the separatist cause often minimize the violence of the FLQ and emphasize the impact of the military occupation and the multitude of arrests. Sources close to the federalist cause, on the other hand, emphasize the seven years of violence preceding the crisis and valorize the government’s actions against the threats of terrorism and general insurrection. 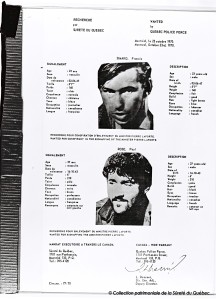 To make matters worse, some aspects of the October Crisis remain shrouded in mystery. Authors will, through extensive research and a touch of bias, claim to know what really happened, but numerous documents from the time of the crisis remain confidential.  As for the conditions surrounding the death of Pierre Laporte, the only people who were there at the time have made confused and contradictory statements that do not confirm the actual details of what happened.

Consider the following statements, extracted from various sources. Hover your cursor over the passages in bold to see how the information presented to the reader conveys a point of view.

←Back to Our October

Back to exhibition main page→