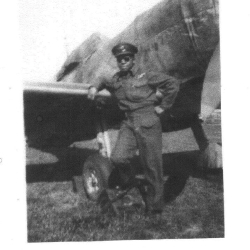 Born in St. John, New Brunswick in the early 20th century, Adolphus, William, Clyde, Donald and Gerald Carty were five brothers who followed the military example of their father, Albert Carty. Albert had been a member of the No. 2 Construction Battalion, Canada’s largest Black military unit, during the First World War from 1914 to 1918.

Military enlistment rules during the Second World War made it hard for Black people to join the Royal Canadian Air Force (RCAF). However, the Carty siblings not only enlisted in the air force but also held different ranks. Four of the brothers served on Canadian bases while Gerald served in the United Kingdom.

At 19, Gerald became one of the RCAF’s youngest commissioned officers. During the war, he flew nearly thirty missions in Europe before getting wounded and then recovering in England. For his service, Captain Gerald Carty was awarded the Defence Medal, the War Medal (Victory Medal) and the Canadian Volunteer Service Medal and Clasp.

The two youngest brothers, Malcolm and Robert, stayed home but followed in their family’s footsteps by joining the air and army cadets.

After the war, all five brothers returned to New Brunswick and became involved in their community. Gerald was an air cadet instructor in the Fredericton area as well as a member of many associations and clubs.

The family continued its military tradition through the years, as many of its members have served their country. Today, seven members of the Carty family are in various branches of the Canadian Armed Forces.

Military Nurses: Where it All Began
Top 10 of the best animals (in war)
Molly Lamb Bobak
Women of the Bombes: Nance Wright & Madge Trull
Matron Margaret Fraser
Indigenous Soldiers of the Great War (1914-1918)