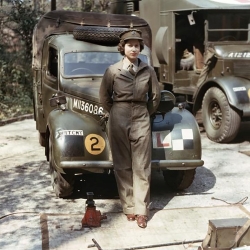 After the longest reign in the history of the British monarchy, Queen Elizabeth II passed away on September 8th, 2022. As soon as the announcement was made, the media was quick to point out the Queen’s devotion to the British Empire, citing her military service during the Second World War as an example. Indeed, while still a princess, Elizabeth II spent five months in the British military services. Prior to this, the young woman had held a largely symbolic role in representing the hope of British youth. This short article aims to explore these two roles of the young Princess Elizabeth during the Second World War.

The war began in 1939, on the European front at least, and Elizabeth was still a teenager at the time. In order to protect themselves from German air attacks, the Royal Family moved her and her sister to different residences in the countryside: first Balmoral Castle in Scotland and then Sandringham House in Norfolk. From 1940 onwards, the Royal Family moved to Windsor Castle for the remainder of the war.

In the same year, Elizabeth and her sister made a radio program aimed towards British children to encourage them through the difficult times. The young princess made numerous media appearances during the war. In 1942, she was given the honorary title of Colonel of the Grenadier Guards and the following year, she officially inspected the troops of the regiment during a military parade at Windsor Castle. In spite of this title, her functions remained very symbolic. This is not to say that Elizabeth did not care about the war. For example, she often took the time to write heartfelt condolences to the mothers of officers who had stayed at Windsor Castle and died at the front. At the age of 18, she decided to join the army in order to participate in the war effort.

Despite her desire to enlist, her royal responsibilities did not allow her to enlist immediately. At the age of 18, the princess frequently accompanied her parents on official visits to various military regiments. It is also possible that the Royal Family was apprehensive about their daughter joining the army. Indeed, Buckingham Castle was frequently hit by German bombing in 1940 and 4 years later, Windsor Castle was hit by a V1 missile that killed 121 people. Also, being a woman, the only option for her to enlist was to join the Auxiliary Territorial Service (ATS). This was not without danger, however, as 335 members of the ATS were killed during the war.

Indeed, the timing of Elizabeth’s enlistment is not insignificant: entering the ATS in February 1945, the princess joined the war at a time when the front was shifting in favour of the Allies and bombing raids against Britain were greatly reduced – in fact, the last recorded V2 missile attack was in March 1945. However, this context should not overshadow Elizabeth’s sincere desire to enlist. Having lived through the bombings herself and having witnessed the many ways in which the war had damaged Britain, the young princess also wanted to do her part, as did many other women in the country.

While in the ATS, Princess Elizabeth joined the Mechanical Division and received training in heavy vehicle driving and mechanics. With the rank of Second Subaltern, Elizabeth focused primarily on driving and maintaining the army’s ambulances. But while she received the same training and rank as the other recruits, the Royal Family was never far away. Elizabeth, for example, had the privilege of being able to return to Windsor Castle each evening to spend the night. Similarly, the entire camp had to mobilize to prepare for the Royal Family’s visit in April 1945. As her colleague Doreen Walden recounted “we were all taken up to this big parade ground, and she arrived and was escorted round, and then went off to the officers’ mess, I think. She seemed to chat to the CO most of the way round, and of course we all got the instructions that you never looked, you just looked straight ahead.”

The end of the war in Europe finally came in May 1945, long before the princess finished her training. However, this did not stop her from completing her training. Elizabeth completed her final test, a solo drive from Camberley to London, like the other recruits. In the end, she finished her service with the rank of Junior Commander (the equivalent of Captain).

At the end of the war, Elizabeth celebrated V-E Day incognito in the streets amongst the British civilians. Her military responsibilities were over, but the future still held much in store for her. The stress of the war took its toll on King George VI, whose health deteriorated rapidly. The princess assumed more and more royal responsibilities over the years, until her father’s death in 1952. A young princess who sullied her hands in truck engines, Elizabeth later became queen.

Published in 2022, we also recommend the book by journalist Robert Hardman: Queen of Our Times: The Life of Elizabeth II, Londres, Macmillan, 2022, 690 p.

Virtual exhibition: Veteran's Voices
VE-Day
Music in the Canadian Armed Forces
Lena Hayakawa and her internment in Canada
Narnia - Between Fiction and Reality
The Regiments of Jubilee in Great Britain (part #2): Garrison Life