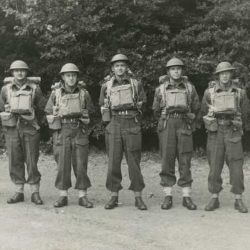 The Dieppe raid was a special operation, and the soldiers had to be well equipped as a result. So what did they bring with them to the raid? This short article looks at the things that soldiers and commando members carried with them onto the beach. Along with their guns and ammunition, the men insisted on bringing along a wide assortment of equipment and everyday objects along for both personal and utilitarian reasons.

Beginning in 1937, the Commonwealth countries adopted a new system of khaki-coloured canvas kit bags for transporting infantry troop equipment. The new webbing system, more modern and better suited to warfare, was first used by the British Army but was soon issued to all Commonwealth armies. When the first Canadian troops were garrisoned in Great Britain, they all received these webbed rucksacks in preparation for their training.

Naturally, every man in the infantry units was issued one of the Canadian army’s standard guns: either a Lee-Enfield rifle or a Bren light machine-gun. Along with their gun and ammunition, each soldier also had to carry pieces of equipment that might be useful in combat situations: an entrenching tool (a sort of small shovel), a mask and anti-gas cape, a compass, a ground sheet and a mess tin and water bottle. In addition to these items, the soldiers were sometimes free to bring any weapons they thought they might need prior to a major operation. In the lead-up to the Dieppe raid, for instance, Canadian soldiers were invited to take whatever they wanted from a pile of guns and ammunition. Here’s how soldier Jacques Nadeau of the Fusiliers Mont-Royal described it:

“After supper, the colonel took us aside to a spot where a large mound lay under a tarp. He had us pull it back, uncovering a huge pile of guns and ammunition. He invited us to help ourselves and round out our supplies with whatever we wanted.

The entire time, the guys had been helping themselves to the pile of ammunition and there was nothing left for me. One of the guys was even having a hard time walking, loaded down with so many bullets and grenades. I took 50 of his bullets and a half-dozen of his grenades, while someone else gave me a magazine. And so I headed off to storm the beach with 61 bullets” (Martin Chaput, Dieppe, ma prison. Récit de guerre de Jacques Nadeau, Montreal, Athéna Éditions, 2008, pp. 51-52).

Left: Lord Lovat’s soldiers, from No. 4 Commando, returning from the Dieppe raid. They were the only commando to succeed in their objective during the terrible assault on the beaches (source: Library and Archives Canada).

Right: A Canadian soldier, wounded during Operation Jubilee, is evacuated by comrades aboard a Destroyer (source: Library and Archives Canada).

Naturally, soldiers sent into combat brought lots of personal belongings along, and these items were just as important to them as their combat gear. It was not unusual to find letters, medals, cards, cigarettes or a little food for the road among a soldier’s gear. Lieutenant-Colonel Labatt of the Royal Hamilton Light Infantry provided this list of what he carried:

To sum up, the soldiers carried an enormous quantity of equipment and personal items during combat. It’s somewhat ironic, considering that the new 1937 haversack model was supposed to make the men more mobile! With all that gear to carry and manage, it’s no surprise that the men’s training in Great Britain was very rigorous!

[1] The Mae West was an inflatable life jacket used by members of the navy. Because Operation Jubilee was launched from boats, every soldier and commando member was issued one of these jackets.