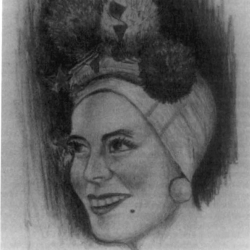 Ferdinand Maria “Sonny” Castro was born in Hong Kong on May 2, 1919. The oldest of five children from a Portuguese family, he enlisted in the Hong Kong Volunteer Defence Corps (HKVDC) like many other Portuguese people in the colony. Castro was assigned to the No. 6 platoon of the light anti-aircraft company, but his specific role with this unit is unclear. The vast majority of Portuguese citizens in the HKVDC were in the infantry, and sources indicate that Castro held the rank of corporal, but more information is hard to locate.

It is also difficult to say what Castro did during the Battle of Hong Kong. What we do know is that on December 21, 1941, Japanese troops landed at Causeway Bay, where Castro’s company was deployed. The Japanese quickly captured and disarmed the Portuguese volunteers before letting them go. Although the survivors remobilized to fight elsewhere on the island, the outcome was already decided, as Hong Kong was captured by the Japanese on December 25, 1941.

Life at the POW camp

The nearly 230 Portuguese survivors were imprisoned in the Sham Shui Po Camp in Hong Kong. Crammed like sardines into two huts, the men experienced the same harsh conditions found in the other camps run by the Japanese. Life there was very difficult, but the men still managed to entertain themselves.

This is where Castro really shone. A fan of the Hong Kong cabarets before the war, he was already known for his imitations of great actresses. Castro kept up the men’s spirits over and over again by impersonating people like the famous Portuguese dancer Carmen Miranda.

The prisoners put on many shows at Sham Shui Po, and Sonny Castro was the star each time. In 1943 alone, the prisoners organized a performance in February, a minstrel show in April, “Boyadère” in June, “Here Comes Charles” in July, “La Czigane” in October and “Blue Rose” in November. One Canadian officer noted down his memories of Sonny:

“One of the Portuguese lads ‘Sonny’ Castro, is a ‘wow’ of a girl… He’s a good looking lad anyway, and his smile, the way he rolls his eyes, his hands, etc., he could pass as a girl anywhere. He used to make up a dancing team with his sister and that has helped him. Have to run the show 3 nights to get everyone—one night specially for the hospital. All the patients that can be moved are taken. It’s wonderful for the morale of the whole camp.“

It is undeniable that Sonny Castro had an effect on the whole camp during the war. Historian Charles G. Roland describes him as one of the most important figures in the camp’s daily life. Many soldiers imprisoned in the camp remembered his performances. These soldiers kept many drawings and autographs from those shows as souvenirs. One of these drawings is posted on the website of the Hong Kong Veterans Commemorative Association.

After the war, Castro spent the rest of his life in Hong Kong. He made a career in commerce in the colony and first worked as a manager for the Shun Hing Shipping Company and for a long time at the Hong Kong Chamber of Commerce. He died on May 24, 1985, at the age of 66, with the knowledge that he left a very strong impression on hundreds of men around the world.