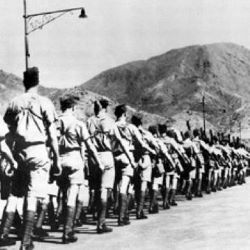 “C” Force is the name given to the group of Canadian soldiers in Hong Kong. The name’s origins are unclear: the “C” probably refers to Canada, but it could also refer to “C class,” the military category of the two regiments dispatched to the colony. In the Canadian army, “C-class” regiments are those that are insufficiently trained to be deployed in combat.

Canada selected two regiments to make up the force: the Royal Rifles of Canada and the Winnipeg Grenadiers. Between them, they represented both eastern and western Canada, an important symbolic gesture for a country at war.

The force consisted of 96 officers, two auxiliary service supervisors and over 1,877 other ranks, including medical officers, chaplains and two nurses. “C” Force was led by Brigadier John K. Lawson, under the command of the British Major General C. M. Maltby.

Founded in 1866, the Royal Rifles of Canada (RRC) were one of the country’s oldest military units. Before Hong Kong, regiment detachments distinguished themselves in South Africa, during the Second Boer War (1899-1902), and in Europe, during the First World War (1914-1918).

The RRC troops were recruited in July 1940. They came mainly from Quebec City, the Eastern Townships and regions across eastern Canada, such as the Gaspé and Maritimes. The men completed their training in October 1940 and were sent on garrison duty to Newfoundland, where they guarded the Gander airport. A year later, they were sent on a new mission to New Brunswick before being transferred to Vancouver a few weeks later.

Following the Battle of Hong Kong, the regiment was reconstituted on January 10, 1942 with new recruits. This new version of the unit was first stationed in Vancouver to protect Canada’s coasts before embarking for Great Britain in 1945.

This regiment was founded in 1908, in Winnipeg. Just like the RRC, the Winnipeg Grenadiers distinguished themselves during the Great War: first mobilized in Great Britain, they then fought in France and Belgium.

During the 1940s, the regiment trained for combat in Europe. However, in 1940, it was sent to Jamaica for garrison duty. There, the men guarded a detention camp for Italian and German nationals. In October 1941, they were recalled to Canada and then sent to Vancouver for transfer to Hong Kong.

This regiment too was reconstituted following the Battle of Hong Kong. After being put on defensive garrison duty in Canada, the unit was reformed as an expeditionary force and dispatched to Alaska. They were then sent to Great Britain in 1944.

Neither of these two regiments still exists today. The Winnipeg Grenadiers were disbanded in 1946, and all that remains today is a cadet corps. The Royal Rifles of Canada remained active until 1965 when they were amalgamated with Les Voltigeurs de Québec. A year later, they were deamalgamated and the RRC were dissolved. Today, the Sherbrooke Hussars wear the badges of the RRC and preserve their memory.

John Shiwak
Military Nurses: Where it All Began
The French-speaking soldiers of Force C
Holiday Reading (2021)
The Polish Forces at Dieppe
The final assault on Stanley Village