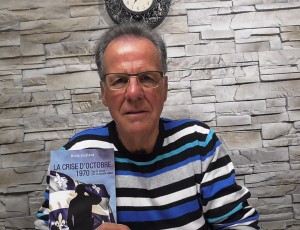 BOOK. The events of October 1970 in Quebec have struck the imagination and are part of the history of the province. While the vast majority know about them, René Gallant from Saint-Anselme saw them and lived them as a simple soldier.

Mr. Gallant had been in the military for just over a year at the time of the events and was called up for service when then Canadian Prime Minister Pierre-Eliott Trudeau declared the War Measures Act on October 16 of that year.

He had been toying with the idea of turning it into a book for several years. It is now done. « My decision has been made for 40 years, but I was in business a good part of my life and retired about 10 years ago. That’s when I presented it to a publishing house in Quebec City that liked my idea, but with a lot of changes to make. I put that aside for a while, » says the likeable character who says he gave in to pressure from his daughter, and also wants to leave his story as a legacy to his family.

Although it took him a long time to complete his work, he says he had no difficulty recovering his memories of the episode. « I was writing this at night, it took me about three weeks to put it all down on paper. It was simple, it’s my life. It’s easy to be inspired when it’s your own story, even if it’s a few years later. I already had notes from 40 years of taking notes. I had two handwritten notebooks. I just had to rework that.

The adventure Mr. Gallant recounts is still fresh in his memory, even though it happened 46 years ago. « I remember it as if it were yesterday because it made an impression on me. When it happened, we were isolated and prepared to leave. Most of my story takes place in Montreal because that’s where I was sent as a member of the Canadian Army. I ended up spending three months there, from early October until the following January when I was told to surrender my weapons, » says Mr. Gallant.

His story is also fascinating to listen to. « From October to December, we were on duty 7 days a week, 24 hours a day. My role at the beginning was to guard police stations, parks and even some VIPs. Then I made deliveries to our satellites that were spread all over the territory of the City of Montreal. I came back to Valcartier where I played a similar role, but finally I was able to finish my commitment. »

Anyone who has lived in Bellechasse since 1975 knows that the October Crisis has struck the imagination. « It’s the worst story to happen in Quebec since practically the time of the Patriotes. The kidnapping of a dignitary and the murder of a minister is something. There have been more than 500 unjustified arrests, some 7,000 searches, I really thought I was at war. Was this amplified politically? It’s not for me to judge, » he suggests, having no real opinion on the subject.

He recalls, however, that the tension that existed at the time was palpable. Not only in the major centers, but also in the regions. « I am a native of the Gaspé Peninsula and we had received bomb threats even there. I was a 14 or 15 year old student and one afternoon we had no school because of threats. We had to take action and react to certain events, that’s obvious. But it’s hard to judge if this way was the right way. »

René Gallant was 19 years old when he enlisted in the Canadian army. « I had enlisted for five years except that I got married in the meantime. I did almost four years in the end. »

However, his perception of events has changed over time, but he also avoids judging the leaders of the two clans at the time. « I was 20 years old. Was all this necessary? I don’t know, » he says. There are too many grey areas. Still, there had been about 20 deaths in the years before the crisis. Why use the army? Because it was cheaper than the police, possibly. »