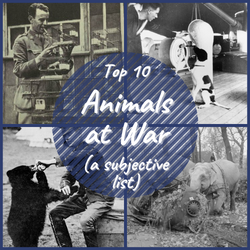 Animals have served in armies around the world for centuries. As both loyal companions and useful assets, war animals have been there for soldiers and officers through all sorts of military missions. Their exploits have been honoured with monuments in many countries, such as Canada’s Animals in War Dedication in Ottawa.

This monument is stamped with the footprints of mules, horses, carrier pigeons and dogs to commemorate the loyalty, sacrifice and courage of these valiant creatures. Whether as messengers, transporters of equipment and troops, medical assistants, or search and rescue workers, animals have played and continue to play a role in human conflicts and deserve to be remembered.

10. A tie between canaries, mice and glow worms

These three types of animals rank in our top ten because of their usefulness. Canaries and mice are very sensitive to different gases, and their agitation would alert soldiers that the air was becoming toxic. As for glow worms, soldiers would read important messages by their faint lights instead of using lanterns that the enemy might spot.

9. Kiri and Many the Extraordinary Elephants

Kiri and Many were two circus elephants from Germany. During the Second World War, after the Allies’ bombing raids over Germany, these two pachyderms would clear the damage caused by the bombs and shells. They continued their work even after Germany surrendered.

This black bear cub was purchased in 1914 in Ontario by Lieutenant Colebourn, who called her Winnipeg in honour of his adopted hometown. Winnie officially became the regiment’s mascot. Colebourn decided to take Winnie with him to Europe and smuggled the bear into England. Before leaving for France, Colebourn gave Winnipeg to the London Zoo. Author Alan Alexander Milne and his son Christopher made many visits to the zoo to see “Winnie,” who became the inspiration for Milne’s Winnie the Pooh stories.

Judy was the mascot for the HMS Grasshopper of the British Royal Navy. The ship was torpedoed by the Japanese, who captured Judy and the ship’s crew as prisoners of war. The captives not only shared their rations with their four-legged friend but also managed to get her registered as a prisoner of war. In return, Judy was extremely protective of her fellow POWs, and she barked and growled to distract the guards when they mistreated the prisoners. She also snuck out of the camp to bring back food. When the camp was liberated in 1945, Judy was awarded the Dickin Medal for her bravery and valour. The Dickin Medal, which recognizes the bravery and devotion of animals in wartime, was created in 1943.

6. Rip the Search and Rescue Dog

This stray dog was adopted by the Poplar Air Raid Precaution in East London during the Second World War. After the German Blitz campaign on the British capital, Rip helped find human and animal survivors among the rubble.

This RAF pigeon was one of the messengers given to Montague Taylor from the Reuters news service before the Normandy landings. On June 6, 1944, Gustav reported the first news that the landings had commenced. The pigeon travelled 241 km from the Normandy coast to its loft in Portsmouth in a little over 5 hours. It was awarded the Dickin Medal before the end of the war in September 1944.

This mascot of the HMS Glasgow was kept on board the SMS Dresden, a German light cruiser. In March 1914, the crew of the Dresden scuttled the ship to avoid capture during a battle and abandoned Tirpitz with the vessel. However, the savvy pig managed to swim away from the ship and get rescued by the crew of the nearby HMS Glasgow. The British sailors decorated her with an “Iron Cross,” a German military honour, for staying with the ship even after the crew had left. Tirpitz served as a mascot on the British ship until 1916 before being retired to the Whale Island Gunnery School near Portsmouth.

Jet was another search and rescue dog trained during the Second World War. He and his handler, Corporal Wardle, rescued over 150 people from ruined buildings that had been bombed during the German air raids. During one operation, Jet refused to move for 12 hours while rescuers tried to reach a victim caught in the debris. This valiant dog was awarded the Dickin Medal in 1945 for his courage.

Warrior belonged to Captain Jack Seely, who served with the British Expeditionary Force during the Great War. Together, “Galloper Jack” and Warrior made it through the combat of the entire war. They survived fierce battles, including those on the Somme and at Ypres. This duo led the Canadian Cavalry Brigade during the Battle of Moreuil Wood in March 1918, which was the last major cavalry offensive of the First World War. Despite heavy casualties, Warrior escaped unscathed. He was nicknamed “the horse the Germans could not kill.” For the 100th anniversary of the start of the conflict in 2014, Warrior was posthumously presented with the Dickin Medal to honour all animals who served in the First World War.

Wojtek was a brown bear from Syria. After being abandoned, he was found by a child near Hamedan in Iran, who, in exchange for some cans of food, gave the bear to members of the 22 Transport Artillery Company of the Polish 2nd Army Corps stationed nearby. Growing up near humans, the bear quickly became the unofficial mascot for units in the area. The cub played and lived with the soldiers, who liked to feed him all kinds of foods. His favourite drink was beer, while he also liked to eat and smoke cigarettes. When the company left the Middle East for Italy, the soldiers officially enlisted Wojtek in the army so that they could bring him along. He was even promoted to the rank of corporal and helped carry ammunition during the battle of Monte Cassino. After the demobilization in 1947, Wojtek spent the rest of his life at the Edinburgh Zoo, where he died in 1963.

*This list is subjective and the examples have been included to generally illustrate the courage and sacrifice of animals in war.