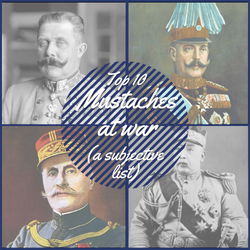 This list is subjective and made with the intent to learn more about the courage and sacrifice of mustache-wearers during the war.

In this month of Movember, we’re celebrating the greatest symbol of masculine mystique, the pinnacle of manliness, the accessory of the century: the mustache. More specifically, we are presenting you with a definitive and, of course, universally recognized list of the top ten mustaches of WWI.

Did you know that the mustache was obligatory in the British Army at the beginning of WWI? Mustaches had come in and out of fashion numerous times over the centuries, but became popular in the mid 19th century in part due to the influence of the Indian colonies, where a mustache was a symbol of virility and wisdom. After the Crimean war, the British army decreed it illegal for soldiers to shave their upper lips. As a result, for the next 60 years, British (and thus Canadian!) military men experimented with the decorative possibilities of their manly whiskers.

During WWI, however, facial hair created certain challenges. Regular soldiers didn’t have the time to trim and style their mustaches in the mud-filled trenches while artillery crashed around them. In addition, gas attacks became common and facial hair could prevent gas masks from sealing properly over the wearer’s face. In 1916, therefore, the British Army removed the rule on obligatory facial hair, and many soldiers opted – those who could grow mustaches at least – for a shaved face. Mustaches remained popular, however, amongst an older generation of politicians, officers and commanders who were, for the most part, not in the line of fire on the front lines and who had the time and means to groom their mustaches.

The popularity of the mustache was not limited to the British, of course. Lustrous facial hair had long been the style of choice amongst French and Belgian soldiers, and was the prized possession of many aristocratic men around the world!

After many months of arduous work, the Je me souviens  team offers you a complete and definitive list of the most beautiful mustaches of the First World War!

Prime Minister of Canada from 1911 to 1920, Robert Borden directed Canada’s efforts in WWI and represented Canada at the Treaty of Versailles in 1919. Known for imposing conscription in Canada, Borden’s government also introduced women’s suffrage at the federal level and fought to put Canada on the international map with a separate signature on the Treaty of Versailles and an independent seat at the League of Nations.  A discreet but illustrious man with a discreet but illustrious mustache.

Initially a powerful leader in the Qing Empire (1644-1912), Yuan Shikai went on to become one of the most important warlords in 20th century China by overthrowing the dynasty. Yuan Shikai then crowned himself as emperor and ruled a fragmented China up until his death in 1916. According to some rumors, it was the powers of his magnificent mustache that allowed him to lead one of the most imposing armies in this tumultuous period of Chinese history.

Best known as the man depicted on this famous recruitment poster, Lord Kitchener also had a storied career throughout the British Empire. In 1916, Kitchener died during the war when his ship hit a German mine. Did the Germans want to destroy the terrifying power of his mustache? Impossible to say, all evidence having sunk at the same time as the ship…

Twice Prime Minister of France, Georges Clemenceau was one of the primary architects of the Treaty of Versailles. Furious with French losses at German hands, he fought to impose the harshest consequences possible on his enemies. By the time Clemenceau was Prime Minister, however, he had already lived a long life full of consequences for his unfaltering opinions and political positions, consequences which included imprisonment and temporary exile. Perhaps in his old age he let his mustache grow over his mouth so that he could mutter insults without consequence!

German Emperor and King of Prussia from 1888 to 1918, Wilhelm II was born on January 27, 1859 near Berlin. He was the son of the Prussian Emperor Frederick III and Princess Victoria of Great Britain (daughter of Queen Victoria). He was known to show little sympathy, especially towards his parents. During the Great War, he urged his generals to strive for greatness. At the end of the war, he abdicated his position as emperor, although not quite voluntarily, and took refuge in the Netherlands. His mustache did not help him at all in retaining his title of Emperor.

Jeremiah Jones might not be the first name you think of when you hear WWI, but this soldier is an incredible example of a man who will overcome any obstacle to serve his country – and to keep his mustache! Not only did Jones manage to enlist in 1916 despite the fact that Black Canadians were not welcome in the armed forces, he also managed to enlist despite the fact that he was 13 years over the age limit. Born in 1858, Jones was 58 years old when he enlisted and had to lie about his age. Perhaps his lustrous mustache hid signs of aging, because he was accepted and went on to fight at Vimy Ridge, where he was nominated for a military medal for bravery.

Born October 2, 1851 in France, Ferdinand Foch was a French marshal and commander of the Allied forces. He is considered to be one of the leaders most responsible for the Allied victory. He began as an artillery officer in 1873 and was appointed head of the Military College in 1908 by Prime Minister Georges Clemenceau. In May 1918, he was appointed Commander-in-Chief of all the Allied armies. In November 1918, he recaptured Alsace and Lorraine for France. He died on March 20, 1929 in Paris. Could it be the superb curvature of his mustache that made the Germans flee?

5. Constantine I of Greece

Constantine I was king of Greece from 1913 to 1917, then from 1920 to 1922. Having studied in Germany, he adopted Germanic attitudes during the First World War. This led to his deposition in 1917 by his Greek enemies, and also by the Western Allies. His military career was initially categorized by failure, until the Balkan War (1912-1913). Following the death of his son in 1920, he took back his throne and led Greece to the catastrophic Anatolian War. A military revolt cost him his throne again in 1922.

The Austrian archduke Franz Ferdinand is well known. He worked to put a plan in place to prevent the rise of the various nationalist and separatist groups in the multinational Habsburg empire. He was appointed military inspector in 1913. It was in this capacity that he went to Sarajevo, in Bosnia and Herzegovina, on the anniversary of the Turkish victory over Serbia on 28 June 1914. Despite the protection of his long and strong mustache, he was assassinated during a detour, which he had made in order to visit the victims of an early morning attack on the road.

Although not human, there is no denying that schnauzer dogs have the most beautiful mustaches! In World War I, these dogs were also an important part of the German army. Charged as guard dogs, messengers or assistants to the medical divisions, schnauzers, with their beautiful whiskers, also deserve their place in our ranking!

Article written and translated by Aglaé Pinsonnault, Julien Lehoux and Marina Smyth for Je Me Souviens.