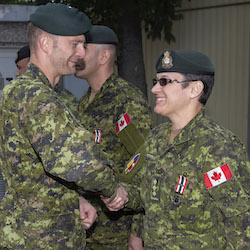 As tensions escalated prior to the Russian invasion of Ukraine, some Canadians might have been surprised to see news articles about Canadian soldiers who were deployed to Ukraine being relocated elsewhere. What were members of the Canadian Armed Forces doing in there? What was it like? We sat down with Captain Nathalie Gareau, who was deployed to Ukraine from April to November 2019, to find out more.

From 2015 until the suspension of the mission’s training and mentoring activities in February 2022, Canadian troops were leaders in the international coalition that trained over 33,000 Ukrainian soldiers. Training included tactical training, combat engineer training, medical training, and training geared at developing a corps of non-commissioned officers.

Non-commissioned officers (NCOs), for those who might not know, start as regular soldiers and become NCOs through years of experience and promotion. Commissioned officers, on the other hand, often have attended military academies or training schools, have degrees and enter the military as officers, at a higher rank than the NCOs, and take on management roles. It seems like a small thing, but in Canada, young officers can be mentored by technically lower-ranking yet more experienced NCOs. It makes our armed forces flexible and modern. Developing the role of NCOs was part of sharing best practices with the Ukrainian forces.

The Canadian Armed Forces saw the mission as a partnership, whose main focus was professionalization, capacity building and learning from each other. During Operation Unifier, Canadians and Ukrainians would share knowledge and best practices to enhance interoperability (the capacity for military groups to operate in conjunction with one another). The Canadians were there to help the Ukrainians institutionalize what they learned in the years they’ve spent in combat leading up to this. All those deployed witnessed the Ukrainian military becoming a more disciplined, more agile, and more effective fighting force.

An Interview with Captain Nathalie Gareau

An Interview with Captain Nathalie Gareau

Captain Nathalie Gareau has been serving in the military for a total of 12 years. She is part of a reserve regiment, the Royal Montreal Regiment in Westmount, Quebec. She chose to join the reserves because she likes the sense of “teamwork and [camaraderie] within the military” and because “it’s very straightforward how promotions work… progressing career-wise is more clear-cut and regulated, there’s more of a framework to it” than in the civilian world. As a civilian she has done translation work and spent a year in Korea. She currently works in the recruitment centre in Montreal as a Military Career Counsellor and conducts interviews and aptitude tests for those seeking to join the army.

How did you end up deploying to Ukraine?

“I gave my name for a deployment,” she said. “Most deployment positions are for personnel in the regular force and some for the reserves, but sometimes when they can’t fill the reg force positions they will send out the info to reserve regiments to see if they can fill the position. I got a deployment rather quickly because I specifically stated that I wanted to deploy, but it would also be possible to be offered a position even without giving your name” if you meet the requirements. Because reservists often have full-time jobs in the civilian world, however, “we always have a choice as to whether we go or not, contrary to the regular force.” And why did she give her name? She wanted to deploy, she said, to concentrate more on the military side of her career. A training mission was perfect for a first deployment.

Pre-deployment training was full-time in Valcartier, Quebec from January 2019 to April 2019. At first, “a lot of it was stuff we do for any deployment, so making sure all of our basic soldiering skills are up to date… Like first aid, biological warfare training, [conduct after capture] training. A lot of it is online learning!” After updating their basic skills, they had training that was more specific to their deployment. Because their function in Ukraine was to help the Ukrainians further develop their training, she said “a lot of our training involved [thinking about] how we develop courses in the Canadian Armed Forces…” They had to learn how to create training courses and then had to learn how to apply that to training Ukrainians and put those courses into action.

Where were you stationed in Ukraine and what was it like?

Captain Gareau and others from her group left on a military flight from Quebec City and arrived in L’viv, in Western Ukraine, before heading to the International Center for Security and Peacekeeping, a base in Starychi, Ukraine, for a few days. Most of the Canadians remained at the base, but those involved with training and development (around 20 people) scattered to different military schools around Ukraine in cities such as L’viv, Odessa, Desna and Mykolaiv. Captain Gareau and a small group headed to Kyiv by train.

In Kyiv, they were “living off of the economy.” Whereas those who stayed on base had military quarters and ate in a cafeteria, for Captain Gareau, “it was just like as if I was in Canada. So, you go grocery shopping, you cook in between the work you have to do… we worked from home basically… When we had free time, in evenings or on weekends, we’d go visit Kyiv and go to different restaurants, things like that.”

What was your first impression of Kyiv?

“I was actually a little bit surprised,” she said, “because in our preparation for the deployment, it was recommended that we watch Winter on Fire, the story of what happened in 2014 in Ukraine, where they basically overthrew the government… And so, I was surprised when we arrived there and it was just like Montreal, you could not tell that there are two provinces that were at war really not that far away from where you are. So, I found that surprising. You see Winter on Fire and see all of these things had happened and then you arrive in Kyiv and it’s really just like any other city. There’s no people with guns or anything like that, whereas you might have expected that, considering the history.” There were, however, a couple of remnants she said, namely metal installations that were put in place to stop tanks. When she was there, they were just landmarks, a reminder of the turmoil 5 years previous. Now, they might serve a different purpose.

What were your tasks while there?

While other groups were responsible for implementing training and doing exercises with Ukrainian soldiers, her group was responsible for training development; that is, working to build the courses and developing the exercises that would help strengthen the Ukrainian security forces and ours at the same time. Within her group, Captain Gareau says, “I was mainly responsible for administration of the personnel… so anything that had to with leave, or if anyone had problems at home or if there were medical issues… I was also involved with the budgeting for our group, so that was really complicated and unpleasant, but I did learn a lot from it!” There is, as she says, always quite a bit of administrative work to do in the Army.

In many ways it was similar to an office job; because they worked the same hours as the military training schools, they would end their day when their Ukrainian counterparts ended their days. They did, however, work 6 days a week and were on-call the 7th day.

Was there any event or memory that stands out to you about your deployment?

There were a few, but Captain Gareau remembers, “when I was there, I was the ambassador for the Canadian staff in the Invictus Games qualifiers while in Ukraine. It’s sort of like Olympic events that takes place for veterans… all sorts of physical activities for disabled veterans.” She added that, they were able to actually take part in a couple of events, “we actually got to play sit-down volleyball. Which is really really hard. So, your bum is not allowed to leave the ground and you have to play volleyball, while sitting down!”

In all, the deployment was very normal, and Captain Gareau said that she was really happy to have had the experience of a deployment and to work more with the regular forces than she had previously. She kept in touch with her interpreter in Ukraine, who is, as of recently, doing okay.

We’d like to thank Captain Natalie Gareau for participating in this interview. Every deployment in the Canadian Armed Forces is different; we hope this article will just shed a little bit of light on what it can be like to deploy and on how Canada and Ukraine have developed a strong partnership and learnt from each other over the past several years.

The following timeline was developed by the JMS staff for educational purposes and is based on research from the sources below. Captain Gareau and the Canadian military were not consulted in the creation of this timeline.

Article written by Marina Smyth for Je Me Souviens.