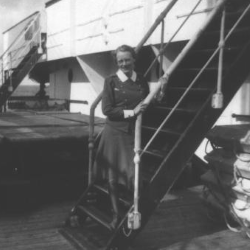 Two Canadian nurses who were members of “C” Force were sent to Hong Kong: Anna May Waters (1909-1987) and Kathleen Christie (1911-1994). Both women had become civilian nurses in the 1920s, and in 1940, wanting to be part of the war effort, they enrolled in the Canadian Army Medical Corps. As officers, the two women received military ranks: Christie, for example, was made a lieutenant.

Both women soon learned that they were to be transferred for postings outside Canada. Waters noted that it might be her only opportunity to travel beyond Canada’s borders. Christie remarked:

“[…] in mid-October, 1941, on being informed that I was slated for duty in a semi-tropical climate and that I had only five minutes to make up my mind, I threw aside my usual caution and immediately accepted this new posting. One week later to the day, on October 19, 1941, I was on board a train to Vancouver, final destination unknown.”

During the battle, the two nurses were stationed at the Bowen Road military hospital, which cared for soldiers (mainly Winnipeg Grenadiers) injured in the fighting just a stone’s throw away. It’s worth noting that many Canadian civilians already living in the colony lent a hand at the hospital. Canadian Alys Greaves, for example, was the last nurse to serve in the hospital, in August 1943.

Christie and Waters spent all their time at Bowen Road and although they had to contend with shelling by the Japanese army, they knew very little about the battle’s progress. The surrender therefore came as a surprise: the nurses had been under the impression that Chiang Kai-shek’s Guomindang troops were on their way to save the defenders.

Upon surrender, a Japanese officer visited the hospital to declare Bowen Road a prisoner-of-war camp. A barbed-wire fence immediately went up around the building, preventing the personnel from leaving and technically making Christie and Waters Canada’s only female prisoners of war.

Unlike other prisoners of war, the two nurses were generally well treated by the Japanese. It would be an understatement to say that it was a pleasant surprise. Waters had heard about the massacre of medical personnel at St. Stephen’s College, and the possibility of similar brutalities taking place at Bowen Road was a constant fear. The two nurses also reported witnessing many atrocities committed by Japanese soldiers on Chinese civilians.

Canadian soldiers from other camps were sometimes transferred to Bowen Road Hospital for treatment. The medical personnel had to care for the sick and malnourished soldiers with sorely limited supplies of drugs and equipment, and the two women were forced to make do with the means at their disposal: Waters would make soup in a soldier’s steel helmet, for example.

In August 1942, the two nurses were transferred to the Stanley internment camp. It was reserved for civilians and, unlike camps for military personnel, it was co-ed and even housed entire families. Stanley’s internees were not required to do forced labour and were largely spared the abuse of Japanese guards, but the conditions were miserable all the same: food was in short supply, disease was rampant and the camp was overpopulated. Fortunately, following negotiations between the Allies and Japan, the camp’s Canadian prisoners were repatriated in September 1943.

The two nurses returned to Canada in December 1943 after a long and difficult sea crossing. They arrived at Montreal’s Bonaventure Station and took the train to their respective homes. Waters returned to Winnipeg, where she was hospitalized immediately because of her weight loss. As Christie said:

“We were back in Canada where we belonged and every one of us had a brand-new appreciation for a way of life we had previously taken for granted.”

On April 6, 1944, the women received the Royal Red Cross Medal for their service in Hong Kong. However, their military service didn’t end there. Waters served on the TSS Letitia, a hospital ship operating in Asia, until the end of the war. She was even reunited with some of the “C” Force survivors transiting through Hawaii on their way back to Canada! Christie, for her part, remained in the Canadian army, stationed at a hospital in Canada, until she left the army in 1945.