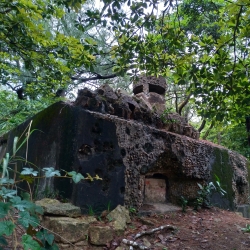 Many leading figures in the war saw the loss of Hong Kong as a foregone conclusion. For example, British Prime Minister Winston Churchill famously told his staff, “There is not the slightest chance of holding Hong Kong or relieving it. It is most unwise to increase the loss we shall suffer there.” The Canadian troops sent to Hong Kong as “C” Force were meant to shore up the colony against a Japanese attack. Unfortunately for the defenders, the predictions came true, as the Japanese army’s assault was ultimately unstoppable.

However, this was not because the Canadian soldiers, like all of the colony’s defenders, did not show courage in battle. Both the Winnipeg Grenadiers and the Royal Rifles of Canada showed commendable spirit, and, 80 years after the battle, we invite you to explore some of their military exploits. In this first of a two-part series commemorating the Battle of Hong Kong, we will take you through the crucial moments of fighting at Wong Nai Chung Gap from December 19 to 21, 1941.

Hong Kong consists mainly of Kowloon Peninsula, the New Territories, and the main island. On December 8, 1941, the 38th Division of the 23rd Army of the Imperial Japanese Army—call sign “Swamp Division”—crossed the New Territories and quickly forced the British and Sikh defenders to recede from their positions. Unlike most of the Allies in Hong Kong, the 38th Division troops were seasoned soldiers and veterans of many garrison missions of the Second Sino-Japanese War (1937-1945). Although the Battle of Hong Kong was their first major fray, the soldiers of the 38th Division were mobilized throughout the Pacific until the end of the war.

With the capture of the New Territories and Kowloon Peninsula, the Japanese army set its sights on the main island of Hong Kong on December 13. The loss of the island would mean total defeat for the Allies, meaning they had to defend it at all costs. Cutting through the centre of the island, the Wong Nai Chung Gap was a major strategic position, and whoever held it also held a great tactical advantage.

British Major-General Christopher Maltby oversaw all Allied troops during the battle. After being pushed back from their positions on the mainland, the defenders split into two strategic brigades to repel the enemy. The East Brigade was commanded by British officer Cedric Wallis and included the 5/7th Rajput Regiment, local volunteer troops, and the Royal Rifles of Canada. The British and Punjabi infantry and Winnipeg Grenadiers of the West Brigade were under the purview of Canadian John K. Lawson. Lawson’s command post was located directly at Wong Nai Chung Gap, and the Winnipeg Grenadiers were responsible for protecting it.

Japanese troops landed on the island during the night of December 18 and quickly neutralized the defenders. The East Brigade tried, unsuccessfully, to push back the invaders, but the Japanese captured every position and advanced deep into the island. Within just a few hours, the troops under Wallis were forced to retreat to Stanley Village far to the south.

Sensing the enemy approaching, Lawson sent off the Winnipeg Grenadiers to defend three important positions: Jardine’s Lookout, Mount Butler, and the road leading directly to the gap. It was not long before the Japanese soldiers encountered the Canadian defenders. The fighting was intense, and huge losses were suffered on both sides. Troop movements at Mount Butler recalled the trench warfare of the First World War, except that the soldiers were fighting on mountainous terrain that was extremely difficult to manoeuvre through.

On December 19, a company of Winnipeg Grenadiers retook the mountain, but the Japanese counterattack was fierce, and once again the Canadians had to pull back. Sergeant Major John R. Osborn led the retreat. As his men attempted to escape the enemy’s heavy fire, Osborn stayed behind and returned fire as best he could while occasionally giving orders to stray soldiers. Meanwhile, the Japanese forces kept up their advance and threw grenades at the small company. Osborn heroically threw himself on a grenade, sacrificing himself to save his comrades. This is how intense the fighting was.

The Japanese easily surrounded the defenders, who struggled to coordinate against the relentless onslaught. The Allies valiantly tried to hold their positions, but the fury of the 38th Division’s attacks prevented them from permanently recapturing their locations. On December 19, the Japanese finally seized the gap and therefore controlled the island’s central position.

The defenders made several attempts to regain the gap. Counter-attacks were mounted, with the Winnipeg Grenadiers and the Royal Rifles joining the assault each time, but to no avail. On December 21, Maltby fought back one last time with four platoons of men, but the offensive was called off when the Allies saw the overwhelming numbers of Japanese. The gap was lost for good.

Losing the Wong Nai Chung Gap was the beginning of the end for the colony’s defenders. The pass was a vital position that linked all of the island’s thoroughfares. For the Allies, the loss of Wong Nai Chung was a sign that the battle was lost for good. They issued their surrender a few days after this defeat.

The defenders continued to fight valiantly until the final hour; no one succumbed to panic, and the Allied soldiers kept defending the colony as best they could despite a vastly superior enemy. For example, the Repulse Bay Hotel was the scene of pivotal battles that helped the Allies stave off the Japanese advance.

Ultimately, the final combat at Stanley Village marked the end of this terrible battle. Stay tuned, as the second part of this article is coming soon!