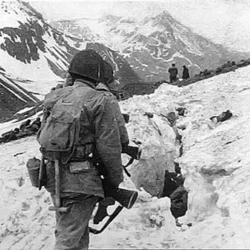 One of the lesser-known campaigns of World War II was the Japanese invasion of US territory. In June 1942, Japan invaded the Aleutian Islands and occupied the territory for over a year. It took a joint force of American and Canadian regiments to dislodge the Japanese army.

The Aleutian Islands are a group of small islands that start from southern Alaska and extend in the direction of Asia. The vast majority of these islands are very small and sparsely populated. Indigenous peoples, such as the Unangan people, are found on several of the islands. However, at the time of the war, these communities were relatively few in number. In addition, the Unangax^ were still experiencing the terrible effects of the Russian and American colonial expeditions of the 19th and 20th centuries[1]. It is estimated that there were about 1,500 Unangax^ at the time of the Japanese attacks. Aside from the Unangax^, some non-native American were also stationed in the Aleutian Islands for meteorological and other missions.

In 1942, the state of the Pacific War was becoming rather unfavorable for Japan. Indeed, the Americans had started to make several breakthroughs and the Japanese navy was in trouble. On June 3, 1942, a few days before the famous battle of Midway, Japan decided to send contingents of troops to invade the Aleutian Islands. Their intention was to open a front further north in order to protect their positions and slow down the Allied advances. By capturing the islands of Kiska and Attu as well, their intention was to open up a network with Midway Island that could help them in a naval war against the Americans. In fact, such an invasion presented little risk to the Japanese army given the very small presence of American troops on these islands. Moreover, a successful invasion would be a major boost to the morale of the empire.

The attack began summarily on June 3, 1942 with a two-day bombardment of the U.S. naval base at Dutch Harbor. As during the attack on Pearl Harbor, for example, the Japanese strategy consisted of getting close to the target by ship and aircraft carrier to bombard it from the sea as well as from the air. This first attack was a small success for the Japanese army, which suffered very little damage. Moreover, it opened the door to the invasion of the islands of Attu and Kiska a few days later. For the Americans, although they did not suffer much damage (apart from a few deaths and destroyed planes), the attack meant above all that the Japanese were poised to launch a large-scale offensive on the entire west coast.

Following the success at Dutch Harbor, the Japanese landed on the island of Kiska a few days later, on June 6, 1942. Apart from the presence of a small team of American meteorologists, the 500 or so Japanese soldiers landing on the island met virtually no resistance. The invasion of Attu Island took place one day later, on June 7, 1942. And as was the case at Kiska, there was no resistance: the only inhabitants of the island were about 40 Unangax^ and a couple of American professors. Thus, in both cases, it was two very easy victories for the Japanese army.

The occupation of these two islands by the Japanese was very brutal for the few people living there. For those who were not killed during the invasions, deportation and imprisonment awaited them. Hence, all captured Unangan and American residents were deported to Japan and placed in internment camps. They were held there until the end of the war. The Japanese remained on the islands for several months. However, the American response was very fierce, and the Japanese army was bombed throughout their occupation of the islands.

The recapture of the islands by the Allies took place during the summer of 1943. In the meantime, the Japanese garrisons had been reinforced. At Kiska, for example, the Japanese increased their strength from 500 soldiers in June 1942 to more than 5,000 a year later. For the Allies, this signaled that the fighting would be difficult. Indeed, at this stage of the war, Japanese soldiers had a reputation for fighting hard for their positions. As a result, a number of Allied regiments were mobilized for the counterattack. Some 15,000 American soldiers were sent to reconquer the island of Attu, for example.

As a matter of fact, the fighting on the island of Attu was extremely brutal. The U.S. General Staff estimated that it would take three days to capture the island, but instead it took nearly twenty days – from May 11 to 30, 1943. The Japanese strategy at Attu was representative of their strategies during the war: withdraw to key positions, slow the enemy down as much as possible, and launch a final offensive when the situation became desperate. The fighting was thus long, tiresome and arduous for the Americans while the enemy soldiers dug in on the island’s mountains. To complicate matters, the weather was extremely difficult: the cold alone caused more than half of the American casualties with more than 1,800 soldiers put out of action. It all came to a head on May 29, when the Japanese launched a desperate charge. Paul Nobuo Tatsuguchi, a medic for the Japanese army who was killed during the charge, left a detailed diary of the final days of the battle. Regardless of their status, all available men were to participate in the assault and the wounded were ordered to commit suicide. There is little need to describe the brutality of the last Japanese offensive, which was largely a hand-to-hand combat. In the end, out of all of the soldiers at the Japanese garrison at Attu, only 28 soldiers were captured by the Americans, the rest were annihilated during the battle.

With the conclusion of the Battle of Attu, the Allies prepared for similar fighting at Kiska. A force of 32,000 Canadian and American troops, twice as many as at Attu, arrived on the island on 15 August 1943. However, the Japanese army had left the island a few days before. Although there was no fighting on Kiska, the Allies suffered several casualties during the following days due to numerous traps left by the Japanese, accidents, friendly fire and weather conditions. The Allied troops lost 300 soldiers in this way.

At the end of the campaign, Allied troops would occupy these islands for the remainder of the war. With the advance of American troops elsewhere in the Pacific, the Japanese were completely expelled from the Aleutian Islands and mobilized their troops elsewhere. The Allies would remain on the islands for a long time to ensure their safety, however. At Kiska, for example, it was the Quebec soldier Dollard Ménard who held the garrison with the Hull Regiment until they returned home. Unfortunately, the question of the security of the islands was used as a pretext for the American government to expel the majority of the Unangan peoples and intern them in Alaska where they lived in terrible conditions. Nearly 75 indigenous people died in these camps and the survivors were not compensated until 1988 by Washington. And it was only in 2017 that an official apology was given to them.

The Aleutian Islands campaign remained a minor front in the Pacific War and despite the difficult fighting at Attu, few remember the sacrifice of the soldiers there. For the Canadian troops who participated in the Kiska operation, no honour was given to them as no combat took place. However, it is still important to at least be aware of this event out of respect for those involved.

[1] Unangax^ is plural for Unangan