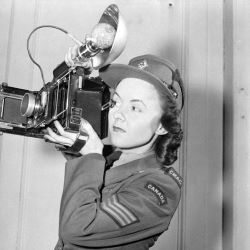 Indeed, at the time, the photos and films shot for the army were not exhaustive: photographers did not film maneuvers or battlefields, which resulted in very short filmed excerpts that were almost unusable. The Canadian Army expressed a desire for better quality film and photography, including filming the use of certain weapons for training purposes or illustrating life in the army to communicate with Canadians and “boost morale and stimulate recruitment.” Among other things, these films and photographs could serve as historical archives. However, this mission could not be carried out by a civilian company, so a new unit, CAFU, had to be created.

Grierson’s vision was that photographers would be attached to a regiment and would follow them on the battlefield, thus undergoing the same training as the infantry of the Expeditionary Force. During the fighting, they were briefed in advance and then would go and position themselves near the battlefield equipped with a Bell & Howell Eyemo 35mm camera, a tripod and 900 to 3000 feet of film, which allowed them to film for 30 to 90 minutes. They carried the rolls of film the same way other soldiers carried ammunition.

One of CAFU’s most famous productions is the Canadian Army Newsreel, a ten-minute film that was released on the 15th of each month and provided the troops with news about sporting events, parades, commemorations, training and non-combat activities. When the Canadian Army entered the war, images of combat were shown.

Sgt. Karen Hermiston with the Speed Graphic 4 x 5 press camera, nicknamed “Old Reliable”, which was widely used. Some photographers swore by it, while others hated it. This camera was very effective as long as the subject was relatively still and the conditions were stable. Photo: BAC-LAC.

At first, only four men made up the unit, but soon their numbers grew and included the only female photographer in the Canadian Army: Sergeant Karen Hermiston, nicknamed Hermie.

Hermie was “frequently told that there were some things a girl can’t do.” That would not stop her; she did them anyway.

During her time serving overseas, Hermie covered casualties flown back to Swindon, went inside operating rooms, photographed graves for the Commonwealth War Graves Commission, and flew all over Europe to document the activities for her fellow CWACs. The petite 5’2 photographer earned the respect of her male comrades and defied strongly held gender stereotypes.

Some photos taken by Karen Hermiston

Article adapted and enriched by Julie Rose. Original article by Valour Canada, as part of a collaboration between JMS and Valour Canada. To see more articles like this one, visit their military history library.