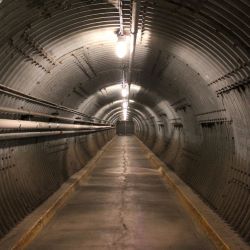 Do you know about the Diefenbunker located in Carp, Ontario, just outside of Ottawa? This shelter was commissioned to protect government officials during the Cold War in the event of a nuclear attack.

The Cold War was a period of high geopolitical tension after World War II that was characterized by ideological differences between Western democracies and Communist regimes and not by ambitions to expand territories. This historical period is also known for the intensive development of nuclear weapons by two superpowers, the United States and the Soviet Union. The conflict went on for almost 40 years and ended with the fall of the European communist regimes in 1989 and the USSR’s collapse in 1991.

In August 1958, when the nuclear threat was at its highest, the Canadian government decided to build a bunker to house the government headquarters in the event of an attack. The bunker became operational in 1961. At four storeys high and with an area of just over 30,000 m2, the Diefenbunker could shelter up to 535 people. Government officials could have stayed there for one month without having to resupply. A system of powerful generators provided electricity, special filters made the air breathable, and a large water supply was sourced from underground wells. An array of antennas was set up around the bunker to maintain radio communication.

Although never used during this time, the bunker was operational for almost 33 years and served as a communications centre for the Canadian Armed Forces. In 1994, the bunker was designated a National Historic Site. Today, visitors can come explore the bunker, which has been converted into a museum about the Cold War. Check it out during your next Ontario vacation!

Article written by Emilie Bernier for Je Me Souviens. To know more about her work, check out her website : https://www.ebnumerique.ca/accueil. Translated by Amy Butcher (www.traductionsamyb.ca).