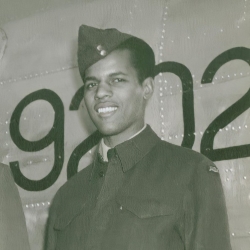 Edwin Erwin Phillips was born in the Montreal area in May 1921 to Edwin and Rachel Phillips, who had immigrated from Barbados. He was one of nine children. An apprentice printer, he enlisted in the Royal Canadian Air Force in 1942 at the age of 21. Three of his older brothers also joined the Canadian Armed Forces. Edwin started as a mechanic in the No. 168 Heavy Transport Squadron before being promoted to sergeant.

In this role, he made many transatlantic trips to accompany cargo flights to Europe, with his last flight being to Poland after the end of the war.

Many countries had suffered during the Second World War, and Poland in particular was devastated by its ravages. When the war ended, a humanitarian crisis and a shortage of medical supplies strained the delivery of health care on Polish soil. The Canadian Red Cross donated a huge supply of penicillin, and the Canadian army agreed to take the precious cargo overseas.

Sergeant Edwin Erwin Phillips was part of this transport. Unfortunately, on November 4, 1945, the Flying Fortress plane carrying the penicillin crashed on a hill in Germany, and all five crew members perished. The causes of the crash are still unknown today. These Canadian servicemen are buried at Munster Heath Cemetery in Germany, and their names are inscribed on a plaque commemorating the Canadian Air Force’s humanitarian activities in Poland.