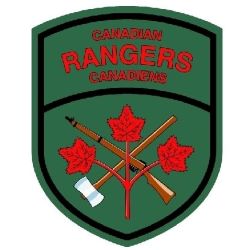 Did you know that there’s in fact a unit of the Canadian Army that is made up of over 60% Indigenous people? The Canadian Rangers represent the Canadian military in isolated northern and coastal parts of Canada and they draw their ranks from local populations including Inuit, Dene, Cree, Anishinaabe, Métis and others who live in the country’s most remote regions.

The Rangers were originally founded in WWII to secure remote areas on the western coast of Canada from a potential attack by the Japanese. During the war they were known as the Pacific Coast Militia Rangers and all members, up to 15,000 men at one point, were volunteers. They provided intelligence on Japanese balloon attacks in 1944 and 1945 and helped provide a sense of security to the local populations.

The program was disbanded after the war, but it was reinitiated and expanded in 1947 as the Cold War began. The Canadian government recognized that it was important to maintain and assert Canadian sovereignty in the arctic, especially with Soviet neighbours vying for its control. The Rangers became the eyes and ears of the Canadian military in a region where it was inconvenient and prohibitively expensive to build military bases. Why build a military base when there are already people on the ground who know the land and its ways better than any southern soldier?  The Canadian Army provides some training to the Rangers, furnishes them with rifles and ammunition, but also relies on and values their local and traditional knowledge.

Though a part of the Canadian Armed Forces, the Rangers don’t follow all of the usual military structures, hierarchies and procedures. Instead, the Rangers are structured to respect local community and cultural norms. Indigenous knowledge is promoted and valued and Rangers will often consult with community elders for important decisions. Instructors and liaison officers from the regular forces or the reserves respect and follow these norms when out training with the Rangers. “Training” is in fact a knowledge exchange as Rangers also teach southern personnel traditional knowledge that can help them survive in harsh conditions.

Today the Rangers consist of about 5000 men and women from northern and isolated communities. In addition to maintaining Canadian sovereignty in remote areas, the Rangers patrol and watch over strategic areas of international interest like the Northwest Passage. They also provide important knowledge and experience in search and rescue missions and are key players in disaster relief, from floods to avalanches. The Rangers are issued iconic red sweatshirts and carry Lee Enfield rifles, which, though they date from WWII, are resilient and effective in cold temperatures!