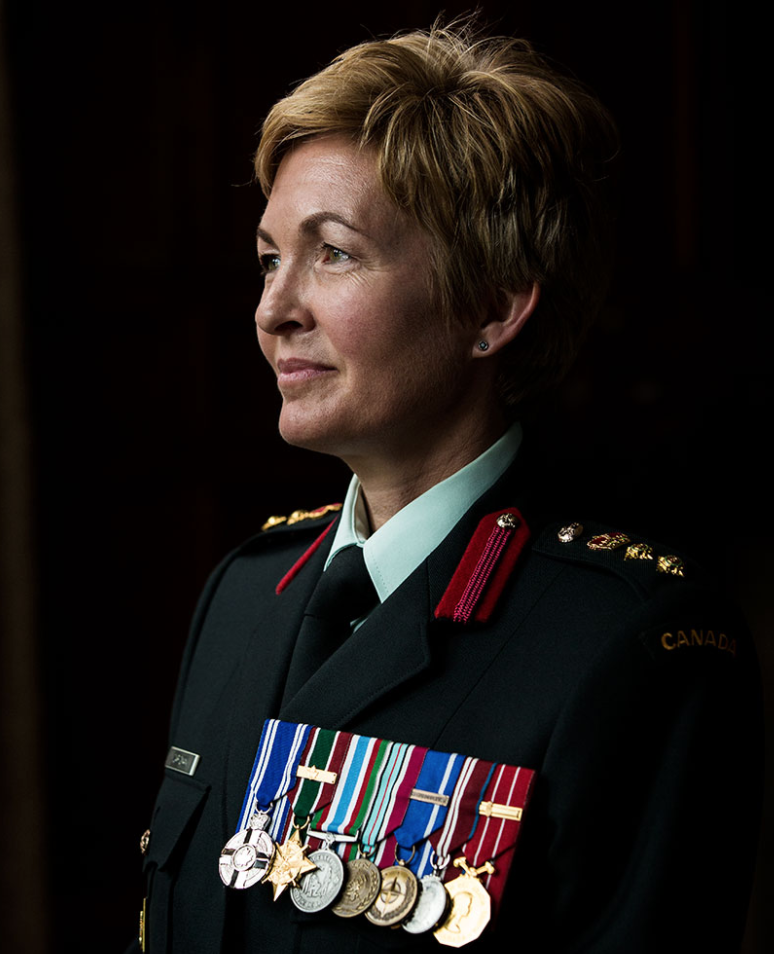 Jennie Carignan has served in the military for over 34 years and was the first woman in the Canadian Armed Forces to lead a combat unit. She holds the title of Major General and Commander of the 2nd Canadian Division and Joint Task Force East, making her one of the highest ranking women in Canadian military history.

This ambitious woman came from a mainly working-class family in Asbestos (now called Val-des-Sources) in the Eastern Townships in Quebec. At a very young age, she dreamed of becoming a dancer, and her greatest wish was to be a ballerina!

After graduating from high school in 1986, she felt a calling for a deeper challenge, which is what led her to pursue a career in the military. As she likes to say in interviews, she was looking for “something bigger than herself.” Encouraged by her family, she went to study at the Royal Military College of Canada in Kingston, Ontario at age 17.

“The principle of obedience to order is extremely important in the military, but it cannot be blind obedience… It has to be a reflection of what is right and what is wrong. You cannot execute orders that you believe to be wrong.” Jennie Carignan, Forbes Magazine

At the time, she had no idea how far this path would take her! She has taken part in many missions in her career, including a peace mission to the Golan Heights. In the 1990s, she was involved in the conflict in Bosnia-Herzegovina, which left a deep mark in that area of the world. She also added a mission to Afghanistan to her list of achievements. She currently leads a team of about 600 troops, including 250 Canadians, in Iraq. This is not a combat mission but rather a support mission to reinforce Iraqi forces to help them fend off a return of the Islamic State militant group.

In addition to an impressive military career, this mother of four has a highly rich and varied academic background. For example, she has a master of business administration from Université Laval, a degree in fuels and materials engineering from the Royal Military College of Canada, and to top it all off, a master of military art and science from the United States Army Command and General Staff College and the School of Advanced Military Studies.

Jennie Carignan is known for her trust-based leadership, which makes her highly respected.

She is an amazing example of a woman who has achieved her goals and stood out in an environment in which nothing is handed to you. She is truly inspiring!

“Conflict resolution is a multi-dimensional, complex affair and hence requires a multi-disciplinary approach with the contribu­tion of a diverse team. In my experience, a diverse team is more tolerant, more empathic, more curious and, consequently, more creative.” Jennie Carignan on gender integration in military operations, www.nato.int, November 2020

Article written by Emilie Bernier for Je Me Souviens. To know more about her work, check out her website : https://www.ebnumerique.ca/accueil.