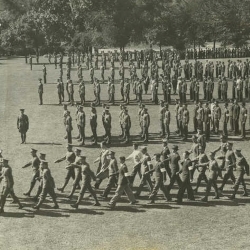 Following Canada’s declaration of war against Germany on September 9, 1939, many Canadian troops were sent to Britain. In the years following the First World War (1914-1918), the Canadian Army had become rusty and desperately needed to become combat-ready again. The transfer of regiments to Great Britain served two purposes: to train soldiers and to defend the island.

The first transport ships arrived in the British Isles on December 10, 1939, and the number of arrivals intensified rapidly in the following months. In 1940, there were nearly 43,000 Canadian soldiers garrisoned in Great Britain. Garrison life was not easy, however. Most of the troops brought to the British Isles were new recruits with no military training. Similarly, many officers had enlisted after the First World War and had no combat experience. Indeed, before a first large-scale operation, it was important to properly train all of these troops, soldiers and officers alike.

During the inter-war period, the Canadian Officers’ Training Corps (COTC) program in universities across the country made it possible to train numerous officers. Thus, many trained officers were available at the beginning of the conflict. However, as the commander of the Fusiliers Mont-Royal Dollard Menard noted, many of the men in the regiments used the army as a social club and had no real experience of warfare. In fact, starting in 1940, training officers in actual military affairs became a priority with specialized training.

The production of military manuals for officers and soldiers increased. These small books, averaging less than a hundred pages, taught their readers about various aspects of warfare: the rudiments of hand-to-hand combat, basic instruction on first aid, rapid assessment of emergency situations, military laws, etc.

In addition to their basic training, the soldiers stationed in Great Britain were subjected to a number of physical training drills: long marches over many kilometers, shooting exercises, obstacle courses and so on. Starting in the summer of 1941, Canadian troops were introduced to battle drills. These exercises were designed to reproduce a combat situation, with real ammunition, in order to prepare the soldiers for real action. This drill was very difficult for the men, who had to manoeuvre in an obstacle course with all their equipment and under real fire. For the officers, however, the results were evident as the soldiers learned to work together better and faster.

Starting in May 1942, after many months of intensive training, several regiments were transferred to the Isle of Wight to begin special commando training. In preparation for the Dieppe Raid, they practiced boat landing exercises, explosives handling and urban combat. The culmination of their training, however, was the Yukon exercises, which were intended to replicate the conditions of the Raid precisely. Unfortunately, the exercises were not entirely successful.

On the night of June 11-12, 1942, the men underwent the Yukon I exercise. As the exercise was conducted very early in the morning, several ships got lost navigating in the dim light. The Royal Regiment of Canada landed 3.2 kilometers from its objective and the South Saskatchewan Regiment landed 1.2 kilometres from its objective. “It was a real fiasco,” Jacques Nadeau of the Fusiliers Mont-Royal wrote. In his case, the ship he was on, carrying troops and tanks, ran aground and was damaged in landing. However, though the landings were unsuccessful, the troops on the ground did well enough according to the General Staff.

Yukon II, on June 29, went slightly better than the previous exercise. The exercise, however, was very rigidly planned and defined and did not allow all of the participating regiments to train on a variety of operational aspects or to deal with the diversity of situations that they would confront in actual battle. The Yukon exercises were organized according to very specific information on German defenses. However, as the Dieppe raid would prove, this information was quite incomplete.

The training in Great Britain was extremely rigorous and produced highly skilled troops. Recruited for the most part in 1940, these men became seasoned soldiers in a short time. Despite the setbacks of the Yukon exercises, all of the soldiers were anxious to prove themselves in Europe. However, aside from the military exercises, garrison life could feel long and uneventful for these action-starved soldiers. Indeed, it was also important to have some fun.

In the second part of this article, we invite you to explore the garrison life of soldiers stationed in Great Britain: between entertainment and boredom.

The Royal Montreal Regiment Museum also has several online photos from its collection showing the daily life of the soldiers there that can be viewed at this link.